If you haven't read part 1, here is a handy link – Enjoy!

The string will continue to oscillate until its energy is depleted, either by being radiated as sound or through damping. Damping is achieved by converting the energy into a form that no longer contributes to the oscillations in the system (here a string) – often heat, which is then dissipated (guided away) and thus lost from the system. In systems where vibration is undesired, mechanisms such as friction and viscous interaction are used to quickly remove energy from the oscillatory motion. A classic example are the shock absorbers in cars.

Considering the guitar, there will be some friction between the string and its supports, which transforms some of the vibrational energy to heat. However, for musical instruments, as much as possible of the energy needs to be radiated as sound. Indeed, the duration of the sound of a plucked string shows that the damping due to losses at the supports is rather low. Instead most of the energy from the string will be transferred to the guitar’s body, though only in small quantities at a time to maintain the oscillations. But why does a guitar even need the body?

If a string were stretched between two concrete posts, it would still oscillate lively, but we would have a hard time hearing anything, especially at some distance. The main reason why the string fails to radiate sound on its own is the ratio between string diameter and wavelength in air.

Most guitar string diameters range from 0.2 mm to 1.3 mm. Compare this to the wavelength of sound in air at 1 kHz, which is about 30 cm, and guitars can generate notes with even lower pitch and thus longer wavelengths. Even at the upper limit of audible sound, 20 kHz, the wavelength in air is still 1.5 cm, which is still a multiple of the string diameter. Consequently, the string does not have enough spatial impact and will be rather inefficient at transferring its vibrations directly into the air. 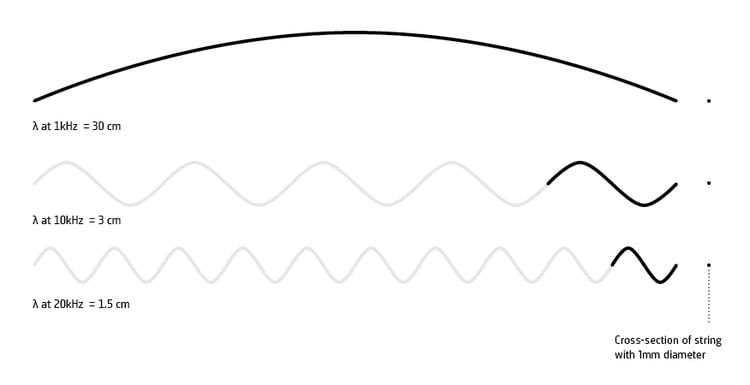 To overcome this poor performance as a radiator, the string can be paired with an excellent radiator: the body. Compared to the wavelengths in air, the guitar body’s large wooden surfaces have a significant spatial extension. Further, by arranging them in a box shape, only the outside of the wooden sheets radiates sound directly to the environment. On its inside, the surfaces interact with the enclosed air, which together with the sound hole, functions as a supporting resonator.

The final challenge is to achieve the right coupling between these complex vibrational systems. The lightweight body of a guitar is easily excited, as can be experienced by tapping it lightly. But as already mentioned, passing energy too quickly from the string to the body would make the string’s oscillation die out prematurely. Thus, the string’s support must be both reflective and move in a way that excites the top plate of the guitar (its soundboard) in an ideal way. 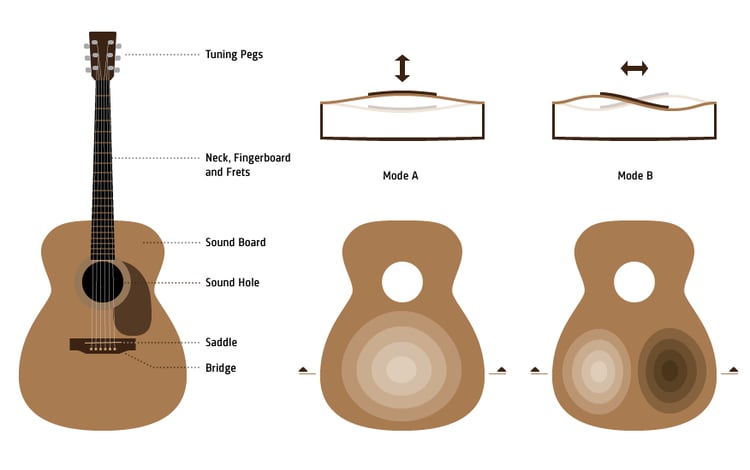 Box 4: Similar to the strings, the sound board of the guitar has some characteristic vibrational pattern. Again, the shapes are most simple at lower frequencies (Mode A) and become more and more complex with increased frequency (Mode B). Depending on the mode shape, it is easier to transfer energy due to a perpendicular motion of the bridge (A) or through a horizontally driven, rocking motion (B). The arrows and lines indicate where we cut through the guitar body to show the bridge/sound board interaction. Last but not least, the actual magnitudes of vibration are invisible to the human eye and have only be scaled-up for clearer depiction.

To see why this is useful, look again at the standing wave patterns of the string from box 2. In context with structural analysis, the vibration specialist calls these patterns the Eigenmodes of the structure (“Eigen” German for “own/self/characteristic”); these are patterns for that specific system. On one hand, the patterns indicate at which frequencies a system is very responsive and will show resonant behavior. On the other hand, the shape reveals where, for that particular frequency, along the structure it is hard or easy to feed energy to or extract energy from the structure.

Places of the pattern that have zero amplitude are called the nodes of the mode shape. These are the locations where we won’t succeed in activating this shape. In contrast, antinodes are the locations with maximum amplitude and there we can easily bring energy into the mode or extract it. Thus, plucking the string at different locations will change the degree to which a mode is activated. Plucking in the middle will enhance the fundamental, whereas moving to either end will give more weight to the overtones. Furthermore, the pointier the kink, the more it will activate higher frequencies because it takes shapes with a short wavelength to build the sharp bend. Thus, plucking with the broad tip of our finger will give a different sound than using a stiff, pointy plectrum (or guitar pick).

Similarly, to transfer energy to the body, the connection from string to body, must be in locations where the soundboard is susceptible to oscillations at the desired frequencies. We can carry out an equivalent modal analysis for the body of the instrument, though analysis and results are significantly more complex due to the shape and material properties of wood. Such an analysis will yield some trampoline like deformation shapes of the top surface, box 4. Again, there will be different patterns, each one associated with a frequency. And again, the higher the frequency the more complex the shapes. As for the string, there will be nodes, where the wooden sheet would hardly move at the associated frequency, and antinodes, where we will have an easy time to set things in motion.

Many of these modes will have a node line along the center of the soundboard, which means that one half of the board will move inwards while the other is moving out. These are then easily excited with a rocking motion of the bridge.

Early instrument builders did not have today’s engineering tools. Instead, they found the optimal way to couple the oscillator to the radiator empirically. Science is now used to explain their findings and designs; however, while the fundamental principles are understood, due to factors such as the use of naturally grown materials, an exact prediction of the details in the final sound of an acoustic instrument may not be possible. It is completely in the hands of the trained craftsman, which probably is a big part of the charm.

While the sound generation in musical instruments may be an exotic subject, many of the principles discussed apply to everyday challenges in sound and vibration: A tiny piece of mortar stuck between two adjacent walls can make the building pervious to sound; Engineers fight daily battles to decouple the vibration and noise sources in vehicles and machinery from radiating into compartments or the surrounding. Modal analysis then plays a key role in understanding why there is a bigger issue at certain frequencies, which structural changes to apply, or where to place damping to battle the problem.

Back to all blogposts

What is a sound level meter?

A sound level meter (SLM) is an instrument (commonly hand-held) that is designed to measure sound levels in a standardized way. It responds to sound in approximately the same way as the human ear and gives objective, reproducible measurements of sound pressure levels.

From the release of the world’s first transistorized and hand-held sound level meter, through the early digital and modular software-driven sound level meters to the touchscreen-driven Types 2250 and 2270 of today, Brüel & Kjær has been consistently at the forefront of sound level meter development.